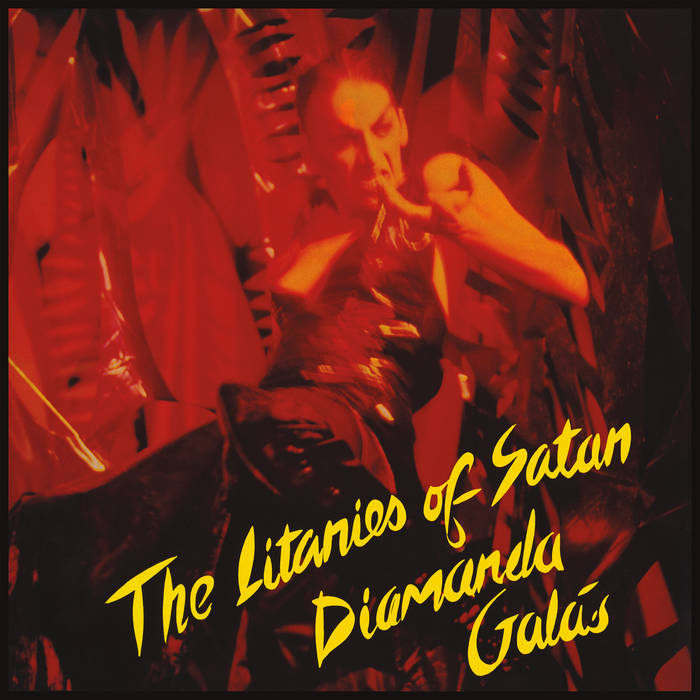 mono_coddou Brutal, extreme, visceral, fantastic and unique. The album that pulled me into Diamanda's world. Favorite track: Litanies of Satan.

Andrew Randell This is one of, if not the best thing I’ve heard in my life. I have a radio show, and have listened to a lot of music through my work for the station, and none of it comes close to this. We got to play this whole album uninterrupted. The more I listen, the deeper my love grows for this album, and the less I want to listen to anything else. Truly, I am hugely grateful that I ever found Diamanda Galás, and that of all universes that exist, we happen to exist in the very same one at the same tim

VENIEN Highly influential masterpiece in the history of our band VON. This is for those open to experience Diamanda Galás in her true and raw form Favorite track: Wild Women With Steak-Knives (The Homicidal Love Song For Solo Screen).

botelho_ it's a great change in music history.
Diamanda's voice and music makes us feel physical sensations in a good psychedelic way. Her voice has no limits.

Avant-garde artist Diamanda Galás’ debut album The Litanies of Satan, originally released on Y Records in 1982, will be reissued on the artist’s own Intravenal Sound Operations label in LP, CD and digital formats on April 3, 2020. The album has been meticulously remastered from the original Y Records master by Galás and engineer Heba Kadry and features the original classic artwork of that release.

This is the first release in a reissue series of Galás work since she regained ownership and control of her entire catalogue last year. Her 1982-2008 work, tied up in major label limbo, was unavailable for years. In April 2019 Diamanda's discography was made on all major streaming services. The s/t Metalanguage album Diamanda Galás, from 1984, has never been reissued and will also be remastered for release this Fall.

When asked about her earliest work, in the early nineties Diamanda spoke of the ‘athletic discipline’ required, and described the physical toll of her performances as ‘like a ripping of the flesh’. Likening the discipline of her attack to warfare, she said that the idea of performing without perfect vocal technique would be like ‘someone going to war who didn’t know how to fight’; she described singing as ‘an attack energy’ – the transformation of the body into a weapon. The Litanies of Satan is divided into two experimental pieces of physical performance with a terrifying intensity, at the limits of madness, which is certainly not for all ears but is in all essence timeless.

SIDE A: The Litanies of Satan is the result of six weeks of intensive work with UK producer Dave Hunt, who is also a composer of electronic music. Known for his work in experimental music, reggae, and post punk, he has worked on records by Michael Nyman, Gavin Bryars, Prince Far I, Adrian Sherwood, The Pop Group, Evan Parker, Derek Bailey to name a few. Recorded in 1982 in Stoke Newington in north-east London.


“I asked Dave the name of his studio and he said, "For all the success we'll have
on this recording, I should say---Nadir Studios.’ -DG

The Baudelaire Song Project, which researches song settings of French Poet Charles Baudelaire, cited the vocal performance of Litanies as 'doing away with the disconnect between body and voice which is inherent in bel canto sound ideals, where an undeniably physically demanding use of the body must appear effortless and free of strain or stress.'

SIDE B: Wild Women with Steakknives was recorded by Richard Zvonar, also a composer of electronic music, in a San Diego studio that Galás states must remain nameless. Many performances of this work were performed in quadrophonic sound with five microphones, one assigned to all speakers, and the other four assigned to individual speakers. Recorded in 1982.


Galás will also release new music in July 2020 in the form of a 21-minute solo piano piece entitled Deformation. It is described by Galás as “a march and delivery of maimed and infected soldiers to hospitals and industrial warehouses throughout Germany during and after the First World War. In the hospitals the maimed would receive experimental operations and the infected would be confined to protect the mental well-being and physical health of the citizens of the State.”

A composer, vocalist and activist, Diamanda Galás is one of the most uncompromising and influential avant-garde performers of the last thirty years, with an extensive catalogue of work that is often oppressive but always thrilling. With a searing voice and background in classical and jazz piano, Galás has exemplified a connection between art and activism, tackling subjects like torture, genocide, and AIDS in philosophically thoughtful and musically incendiary ways. Galas has previously collaborated with the avant garde composers Slovenian Vinko Globokar and Greek Iannis Xenakis, and musician/ Led Zeppelin bassist John Paul Jones.


The origin of Intravenal Song Operations
In the late seventies Galás was inspired by the research in subtractive synthesis by Iannis Xenakis, and set about her own research in what she describes as the ‘shredding of a complex vocal sound into slivers of sound, moving back and forth rapidly.” Her work in the area would be published in 1982 by Perspectives of New Music. This manifesto was entitled Intravenal Song.

-The Litanies of Satan (from the poem by Charles Baudelaire)
Devotes itself to the emeraldine perversity
of the life struggle in Hell.

-Wild Women with Steak-Knives
(from the tragedy-grotesque by D. Galás "Eyes Without Blood")
Is a cold examination of unrepentant monomania,
the devoration instinct, for which the naive notion
of filial mercy will only cock a vestigial grin.

A Note to the Listener by Diamanda Galás, 2019

Intravenal Sound Operations would like to suggest to the listener of these works, that The Litanies of Satan and Wild Women With Steakknives are not, nor have ever been, political pieces. It is suggested that, contrary to resorting to self-serving interpretation, the listener just listen and add nothing of his/her/whomsoever's own.