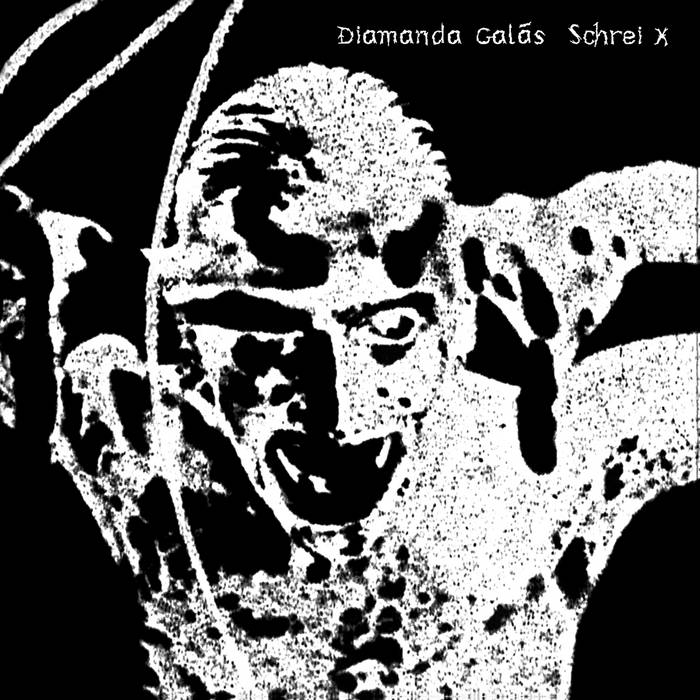 He eats his skin with the two hands
First-born Death with both his hands
He is snatched from his bed,
And marched before the King of Terrors.
Job XVIII 10:14

SHRIEK: As in rape, torture and other human experiment,
the shriek of an animal which is repeatedly attacked
within a contained space.

For I know that my redeemer lives
A guarantor upon the dust will stand;
Even after my skin is flayed,
Without my flesh I shall see God.
Job XIX 25-26 (Dahood/Marvin Pope translation)

The radio program of Schrei 27 was recorded
at Gark Studio (Minneapolis), 1994.

Portions of Schrei X were performed and recorded live
at The Knitting Factory and P.S. 122 (New York, NY),
the Archa Theater (Prague, Czech Republic), and the
Portland Institute of Contemporary Art (Portland, OR)

All work composed, written and performed by Diamanda Gala´s, with the exceptions noted.

Schrei 27 was a commission of the 1994 New American Radio series in collaboration with the Meet The Composer/
Reader’s Digest Commissioning Program, the
National Endowment for the Arts, the Lila Wallace-Reader’s Digest Fund, and Walker Art Center.
It was developed for national broadcast with New Radio and Performing Arts and the Walker Art Center.

Schrei X was developed as a performance work in 1995 at the Wexner Center for the Arts at The Ohio State University
and premiered on April 1, 1995. Commissioning support for Schrei X was provided by the Wexner Center for the Arts,
On the Boards, Hancher Auditorium at the University of Iowa, Northrop Auditorium at the University of Minnesota and
Walker Art Center, with funds from the Northwest Area Foundation and Arranged Introductions:
Art Works in Different Places, a project of Temple University’s Tyler School of Art.